The Stadium doors in Verdansk in Call of Duty: Warzone were closed for a long time. During the gift season, the game developers opened the Stadium to players. This map location was already a viable point of interest for online gamers. After the latest update, they started to notice mystery doors around the stadium.

The gamers can unlock these doors using the correct Warzone stadium access code. And, they need to find three access cards from the landmark. Collecting these keycards might be challenging in this multiplayer game. Usually, the access cards can be located on the Stadium floor.

But, sometimes, you might not find the access cards on the floor or inside the stadium. This indicates that the other players can pick these cards. Thus, you need to find these players to claim the keycards.

There are four locked doors on each level of Call of Duty stadium. And, it requires a specific access code to open the doors and collect the items. Opening the last door might be difficult for online gamers. Moreover, It can take several attempts to crack the code and unlock the access door.

You will find the last door on the second level of the warzone stadium. And, you need to open the three locked doors to get the access code. When you get into the stadium, look for a computer and jot down the codes displayed on the screen. Once you decode that, open the loot boxes to collect gas masks or ammo.

Here is the game location where you can find the locked doors:

The gamers can find this locked door on the first level of the stadium. Enter the game lobby, open the map and locate the “Stadium”. And, when you reach there, move to the northern side and go down a little to find the door. Enter the access code P216 to open the door.

Didn’t get any locked doors? It is behind the ramp. Go there using the parking level of the stadium. As it’s safer than crossing the place using the upstairs. Moreover, you should keep checking whether there is an enemy inside the stadium. And, if you find the door open, then the other players have already unlocked it

You can find this locked door on the second level of the Warzone stadium. Use any of the elevators to get to this floor. Additionally, you can use ropes to reach this map location. Move towards the south of the stadium to get this access door.

Enter the Warzone Stadium access code EL21 to unlock the door. And, once you do that, the map will show you a green mark around the location.

Didn’t open the door even after entering the coronet keycard? Then, it could concur for a high ping rate. Close the game, and change the Wi-Fi network to avoid glitches while playing Call of Duty: Warzone.

It is pretty easy to find this door from the Warzone’s 5th season. Go to the first floor of the stadium and look behind the bar. However, the chances are high that other players might be here. Be extremely careful when entering this game location.

Because you might lose the match if an enemy finds you. Do you know which Warzone stadium access code will open this door? Enter CL19 to open the door and collect the required items.

Moreover, there will be a lot of supply boxes in the room. The gamers can get killstreaks, new armour plates and satchel from there. Sometimes, you may collect self-revive kits and other weapons from the boxes.

This is the last door of the Call of Duty: Warzone Game. And, it requires a series of numbers to unlock it. The gamers need to collect the three codes shown in the computers on the last three doors. Mix and match those numbers to break the code.

Didn’t understand how? Well, each letter or symbol of the code stands for a number. And, you need to decode that after getting the three codes.

How to find the Call of Duty: Warzone Access Cards?

The Call of Duty players can get the blue key cards or access codes around the stadium. And, don’t stand in front of the stadium. Instead, roam around the place to find them. There are no specific spots where you can locate the access cards.

The keycards might appear randomly in this game location. Many have picked the red keycards to unlock the door. However, those access cards are for opening the bunkers, not the stadium doors. You need to find the blue cards across Verdansky to unlock the doors.

Can You get Stadium Door’s access Cards after eliminating Enemies from the Game?

The enemies can collect the keycards before you reach Verdansk. If you find any players around the stadium, try to remove them from the game. And, by doing that, you may get access cards from them.

Look at the defeated player’s items and check if there are any keycards. If you get the enemy at the stadium’s second level, getting all three cards is high.

What are the Rewards for Decoding the Warzone Stadium Access Code?

The gamers can get access to exclusive ground items after unlocking the doors. These items will help you to defeat the enemies and win the match.

Did you get an item with a single green diamond on it? This indicates that you have been rewarded with a rate item for opening the door in minutes.

By guessing the access code, you can get golden gas masks. This is a legendary item which lets you expand the circle before it collapses.

Moreover, the players can get a significant amount of cash in the plunder. Use that to further buy the required items to compete against the enemies.

Besides, you can get easter eggs inside the stadium access doors. There are also clues on how to crack the code and future Warzone events. A unique AMAZ blueprint is hidden in the final Stadium lock door. So, get the access code and open the doors to get these rewards. 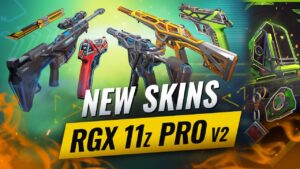 Next post What are the Valorant New Skins & How to Get them?