Modern Warfare 2 offers you a very wide range of weapons to choose from. These weapons do not appear at the same time in the campaign mode. So, the choice is not much difficult while playing as a single player. It is during online matches that you need to pick the best weapons for your play style. The choice of guns can make a significant amount of difference to your match results.

You must aim to get the perfect loadout for Modern Warfare 2 multiplayer. And, that requires you to choose your primary and secondary weapons wisely. Check out the Call of Duty Modern Warfare 2 best guns given below if you are looking for viable options.

Best Call of Duty Modern Warfare 2 Guns across all Types

You have several types of guns to choose from in Modern Warfare 2. And, that includes assault rifles, sniper rifles, submachine guns, shotguns, marksman rifles, and light machine guns. Which of them suits you best depends on your play style. Here are the overall best options you will find in the game:

The M4A1 is a classic weapon in the Modern Warfare series. You can use this gun from the very beginning in the single-player mode. But, in multiplayer, it unlocks only after you have gained some experience. So, you would have to wait for some time to be able to use this gun in multiplayer.

Once you unlock it, you can make a lot of customisations to the M4A1. It is probably the most customisable gun in Modern Warfare 2. You will find a lot of attachments for it to increase its deadliness. So, it should be among your top considerations for multiplayer mode.

The AK-47 is yet another commonly found gun across shooter games. In Modern Warfare 2, it is among the top high-damage weapons. So, it is a perfect choice if causing high damage is your priority. However, its damage decreases if the opponent is more than 50 metres away from you. Other than that, it is quite a reliable weapon for the multiplayer mode.

This gun is also a good choice if you are looking for accuracy. It also lets you use the basic set of attachments such as grenade launchers and scopes. However, it also has some drawbacks regarding handling and recoil.

The UMP45 is unlocked when you start playing Modern Warfare 2 multiplayer. Also, it is one of the best guns that you can find in the beginning. If used in the right way, it can help you level up through the ranks faster. The UMP45 has one of the highest damages per bullet among all submachine guns in the game.

This gun can perform quite well against assault rifles and might even beat them. Moreover, it can offer you a three-shot kill regardless of the distance in regular matches. The comparably slower firing rate and high recoil are the UMP45’s biggest disadvantages.

The MP5K is a great alternative to the UMP45 and deals 40 damage for up to 25 metres. Beyond that range, its damage decreases to 20. The high firing rate of this gun makes it highly effective at close range. However, it has a disadvantage when it comes to the magazine capacity. You would have to reload more frequently unless you have great trigger discipline.

You can use all the basic SMG attachments with the MP5K. The high recoil is the most important disadvantage this gun has. And, that is mainly because of its high firing rate.

Shotguns are a great option for taking on opponents at a close range, and you have several shotguns to choose from in Modern Warfare 2. The Striker does not have the most serious damage yet is one of the most effective shotguns. It has a 12-round magazine, and the recoil is pretty much negligible while using the grip.

However, more rounds mean a higher time required for reloads. And, that makes the reloading time of this gun comparably slower. Besides that, it can be a useful addition to your multiplayer loadout.

This gun has a good firing rate and can deliver one-hit kills, which is a deadly combination. You can surely score some wins for your team with it. This rifle can be useful in close-range fights as well, thanks to its firing rate. However, the recoil is quite high and might make you lose the target from your sight.

The Aug HBAR is not available at the beginning of your multiplayer career. You can unlock several other LMGs before it that can offer impressive performance. But, you might not need them once you get your hands on the AUG HBAR. This gun can deal quite a lot of damage and also has a high penetration power. So, you can use it to eliminate opponents on the other side of a wall.

You can get a moderate accuracy from this LMG, which is better than some other options. However, it has a considerably lower magazine capacity than other light machine guns. Also, the low firing rate makes it comparably less reliable at close range.

Add the Right Attachments and Perks to Your Loadout

Getting a good gun is not enough for an optimal Modern Warfare 2 multiplayer experience. You must also pick suitable attachments for your weapons. And, that is something which is best left up to your preferences. The same applies to the wide range of perks available in the multiplayer mode. 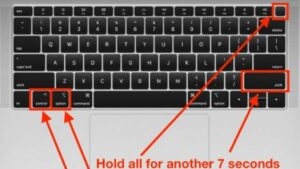 Next post How to Fix SMC Related issues in MacBook Pro & Air?