Discord API is a great platform for developers who want to create bots, mods, and other significant features. The Application Programming Interface or API is software for connecting a user to an application or website. Developers find the Discord API convenient when they need to interact with Discord services, servers, or anything else.

Discord acquires a definite permission system, and apparently, your API is missing the required permission. Generally, Discord permissions get stored in an integer that is 53-bit long. Additionally, some limitations and oddities should be specified to eliminate the ‘Discord API Error Missing Permissions’ issue.

Why does the ‘Discord API Error Missing Permissions’ Message Appear on the Screen?

According to the developers worldwide, the ‘DiscordAPIError: Missing Permissions’ issue can arise due to multiple reasons. Check out the reasons below and try to find out which one is your instance:

Developers have reported that the bot might be trying to timeout a particular member with ADMINISTRATION permission. Here are a few situations where you can encounter the ‘DiscordAPIError: Missing Permissions’ error:

Check if you are not repeating these mistakes that can result in the Discord API Error Missing Permissions issue. Remember that it doesn’t skip hierarchical checks when it grants the ADMINISTRATOR permission.

Permissions inside the Discord interface are the key for users to grant a few abilities and limit some of them. Users need to configure permissions according to their guild level for diverse roles. They are designed to grant or deny permissions within the guild whenever roles are assigned.

When it comes to the discord.js environment, permission bit fields are represented as referenced flags or the decimal value of the corresponding bit field.

Here’s how Discord defines the final permissions of a guild member:

When this system is in action, you cannot deny base permissions. If you apply the SEND_MESSAGES permission to @everyone, but forget to grant it for a muted member role, muted members can still send messages. Make sure that you specify channel-based overwrites in these cases.

Similar to the Discord API Error Missing Permissions, you might be experiencing missing access due to permission constraints. Make sure that you have included VIEW_CHANNEL in text channels.

Additionally, voice channels should have CONNECT. When you are timing out a member, use MODERATE_MEMBERS. If the DiscordAPIError: Missing Permissions persists, contact Discord support or a professional. 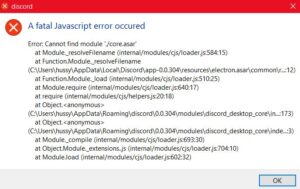 Next post How to Fix a Discord Application Error on Your PC?